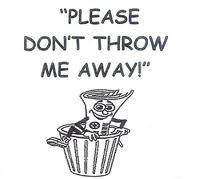 I have not yet reached the acclaimed position where I make a living from my creativity (though I’ve recently realized most of that is my own fault). But even if I never earn a substantial living from my gift I would still continue to do so. I may sometimes hit ‘dry spells’ and sometimes even think “I’m just not going to write anymore” but the innate passion is always there, beckoning me to embrace it once again and again and again. I doubt I could ever ‘quit’ because I feel empty when I cannot apply the skills, talents, and craft for myself. Part of it is about putting it out there for the world to see, part of it is putting it out there for me to see. And the rest of it is about harnessing that which is a part of me and letting it live, breathe, and come alive…and getting it out of me.

I’ve been writing since I was four. There is rarely a day that goes by that does not involve some idea cranking its gears inside my head. Most of those ideas sit unused in a notebook, file, or folder but I have learned that a lot of those ideas won’t always result in its own novel or even a short story but they very often find their way into another story idea. I’ve found ideas jotted down two, five, sometimes even ten years ago have fit ever so nicely into something bigger.  Even those ideas that never get used though are not deemed useless because who knows what novel idea I’ll have ten years down the road that will require the use of one of those small jotted notes?

I tell my children not to tear things out of notebooks. DON’T THROW THAT AWAY! Sure I have piles of notebooks that have only a few remaining pages left in them, the rest having been discarded due to scratches and doodles while on the phone, completed (or ignored) to-do lists, and other whatnots. But those notebooks have residue of great potential. Even the most insignificant drawing, scene, character sketch, or one-liner can be the dynamite needed to turn a novel right-side up, bring new breath to a dying short story, or be the perfect tension to compel a character to the next scene.

The craft we sometimes take for granted, the skill we sometimes consider a burden is something that will never go away. At least not for me, I don’t think anyway.