When I was three or four my Granny O. had these three small, fat books. They were my favorites and I learned to read using those books. I’ll admit today when I go visit her I always fondly recall those books. Even though she doesn’t live in the same home as when I stayed with her I still go to her house and can’t help but look around the place and I am swept back into time. A time where she would give me flashcards with letters and I would have to put them together to form words. A time where a myriad of Disney Comic books and others drew me into a world of make-believe where princesses could slay the dragons, youth had power and could save the world by believing, and magic closets and lions were something to seek and fall in love with.

She instilled in me a passion for reading and writing. She introduced me to many fantastic voyages. She proved to me that while television and movies were fun diving into a book created many more opportunities and there was no limit to where I could go, who I could meet, and what I could do. While my mother would show me books like Good Night Moon and I loved those special moments of her reading to me, it was my Granny O. who gave me the book Fievel, An American Tale. I loved that movie but seeing the story in words, along with the pictures, it was amazing. I learned that those movies I loved were only a bunch of words and some colorful pictures.

It may sound silly to you, the reader, but for me, that was a pivotal moment of change for me. I was forever altered, never to be the same girl. From that moment I was a writer. I wrote stories. I was only six and seven so my experiences weren’t wide and far but I still ‘wrote what I knew’. I merged characters like Curious George and Shirley Temple and gave them adventures. In fifth and sixth grade I was fascinated with the emergence of AIDS. TV commercials offered advice and info (just call this 800 number!) and learned as much as I could by getting brochures and pamphlets. In sixth grade I wrote a novella (though I would hear that term for years to come) and I won a Young Author’s Award for my story about a young girl whose brother had contacted AIDS and if she didn’t change her life she would likely end up the same.

In 8th grade, my best friend Eva introduced me to V.C. Andrews and I immersed myself in the dramas that unfolded within those pages. In 9th grade I wrote my first novel of a teenage girl who ran away from her troubles only to find those troubles followed her where ever she went. That same year I found JRR Tolkien Lord of the Rings series and Stephen King Gunslinger series. Once again, my world was altered. WHOAA!!!! Did it ever change. I don’t think you could pry books out of my world after that.

About six years ago I found the Sword of Truth series. I had never been turned on by this genre. I’ll admit I sneered my nose at those D&D books I saw all kinds of boys reading when I was in high school. Dragons didn’t faze me. Elfs…no thanks. And yet, there was something about this series that captivated me. I think the number one thing was there existed a strong male and female protagonist throughout the books. That’s just my best guess though. All I know is it was a beginning that I am forever grateful for.

After that I found Karen Moning’s Fever Series and fell instantly, madly in love. Never in my life had I read a book series that had a main character with MY NAME…oh, well, okay…she spells it differently but H-E-L-L-O!!!! OMG…I read that series at least once every single year.

Which leads me to SERIES. Love is too small and meager a word to say how I feel about book series. I enjoy them. I have read a number of various book series. Today I am still an avid reader. And a writer. I still turn to books for exotic journeys, tragic journeys, hero’s quests. And yet there will always be a few favorites on my shelves. I don’t hold onto many books. They tend to come and go quickly in my house. There are a few series however that I hold onto like rare and precious porcelain dolls, where no one is allowed to touch them.

I emerged as a butterfly and fluttered through years and years of agony, hoping and praying against all that King would live long enough to finish this series. I wasn’t even fourteen when I first read The Gunslinger and the next two in the series. It did take many years of praying and I felt like almost dying (selfishly angry) when King was hit by a vehicle. All I wanted to do was scream ‘Don’t die. Roland’s story isn’t finished yet!’

Enter the world of Fae. I’m sure I had known of it, I mean, we’ve all heard of Peter Pan and Tinkerbell. But I’d never known that Fae could be so dark, so deadly, and so intoxicating. I read this book series at least once a year. (Did I mention that yet?) Haha 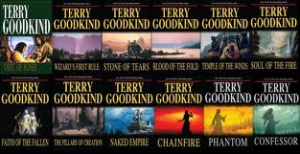 Goodkind showed me that girls can be just as much into fantasy novels as boys. LOL I know that sounds awful as I was a grown woman before ever hearing of his books but he really did open up this genre for me. So much so that my first heavy novel-writing was fantasy based. I never knew I had it in me. Thanks Terry! 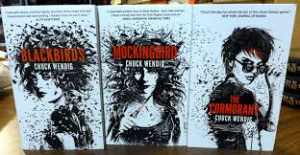 Chuck really came into my life at a crucial moment. I was battling rough waters of what many call writers block. I wasn’t producing much, I was dealing with personal crisis after crisis. And I had lost my way as a writer. I couldn’t conjure up anything if you were to ask me what inspired me to write. His book Blackbirds was a big ass whomp to my inner demon (the self-critic) and by reading this series I learned to stop judging myself and to write true to myself. I learned that sometimes you are going to have to take the chance of pissing off people if you are going to write well. Side Note: I had an awesome time meeting him at last April’s Pikes Peak Writers Conference in Colorado. OMG…I met my hero!!!!

Of course, there are plenty of other excellent reads. What books line your shelves? I’d love to know. I’m always ALWAYS in the mood to add another great series to my collection!

1 thought on “Somtimes it does begin with a bang.”