The Witch is Back by H.P. Mallory

The Witch is Back by H.P.Mallory (Book 4 of Jolie Wilkins Series) 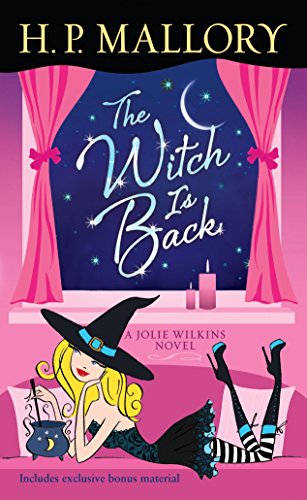 Jolie is thrust in the her past immediately in the beginning of this novel. She is back to her Tarot Card reading days in her Los Angeles fortune-telling business. Everything is back to how it was before she learned she was a witch and things are playing its course all over again. Except this time, instead of meeting Rand first…she meets Sinjin. She immediately feels the electric chemistry, as she always had but this time she goes for it. Sinjin scares her and she is shocked to learn he is a vampire; even more shocked to learn she is a witch.

And then, in walks Rand Balfour, who she can’t help but feel as if she knows him more than she does. Sinjin, however, tells her he is dangerous…tricking her with his magic. And she doesn’t trust him one bit after that. But Rand isn’t about to give up. Not after only finally bonding before Sinjin performed the spell to alternate Jolie’s past.

If I say anymore about this book I’ll surely give away some good stuff…and as they say on Doctor Who…No Spoilers!  I wouldn’t begrudge you the chance to read and experience everything for yourself. And believe me…this is one you definitely don’t want to miss! If you’ve read the first three books…this one is the one everybody has been waiting for. Sinjin gets his chance…his big role and Mallory doesn’t displease!

The characters are well-groomed by now but all those small hopes and wishes you’ve been aching to experience actually get to play out in this book. And Amazon makes the books so darn inexpensive it’s ridiculous for you NOT to buy the entire series.