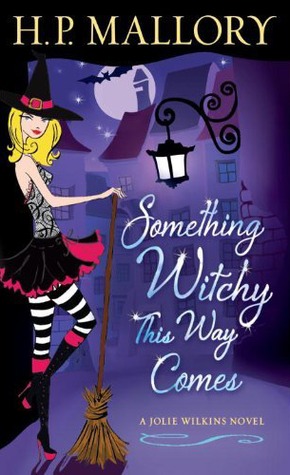 When the Lurkers start messing with her head, telling her things she doesn’t know what to make of or whether she can believe or not…she isn’t sure who to go to if anyone at all. And even though she has the most powerful Warlock on her side, she doesn’t feel comfortable talking to Rand about the things that she hears and sees.

And then there is Sinjin. He made the ultimate wrong powerplay in forcing the past to be altered. For that, Jolie must show everyone there are consequences…even when she doesn’t agree with the harshness of such consequences. And with him out of the picture, with the Lurkers ever more present, Jolie is heading into some darkness that she just may not be able to get out of.

Now this book is the last of the series that the H.P. Mallory has written. I’m not sure whether she intends on writing more or not. I wasn’t especially over-thrilled with this book. There were aspects that I just wasn’t feeling. I honestly felt that Mallory had allowed Sinjin his five minutes in the spotlight and then it should have been done and over with. But it isn’t. The author is still writing Jolie with having feelings for Sinjin. The only problem is, she’s bonded with Rand and that should be it. Done. No more.

This book had elements that were unique, as Mallory is so quite capable of doing. The Lurkers have been a constant small plot that has ran through the books and for the most part…building up to this exact book. Unfortunately, it was all rushed. It was too personal. It was all wrong. In my opinion, of course. To have a new character introduced into the series and then left with so much unresolved is just wrong.

Completely wrong. I would have preferred the writer quit with the last book if she was going to go about this book in this manner.

Sadly, this book was not my favorite and to have it a series and end the way it did my verdict went down and down and down.